If you had told me a few years ago that I would one day trek through the jungle in Thailand with no shoes on, I would not have believed you.

You see, not too long ago I lived in a very different type of jungle. A concrete jungle. Granted, in my hometown of Perth, Western Australia, it’s a rather small concrete jungle, but my thinking was influenced just the same. Nature was for someone else.

I lived in the world of pressed shirts, corporate skirts and caffeine runs. On the rare occasion the topic of kids would come up, my standard response was usually ‘Kids? What on earth are they?’

Not a kids person (so I thought)

I had resigned myself to a different path. I believed I wasn’t a ‘kids’ person, just as I believed going without shoes was… just weird. Especially in the jungle.

The corporate world was my domain, so it’s not hard to imagine what I might have thought of au pairs. Don’t get me wrong, I thought au pairing was a great idea. So helpful, for people who needed help with their ‘kid humans’ so they could go to work. In the jungle. It just wasn’t for me. Or so I thought.

I used to think au pairs were only people who instinctively loved kids. I thought they were the type of people who carried glitter on their person at all times, smiled even when their mouth grew sore, and spoke in a high-pitched childlike voice that teetered on the edge. Their edge, my edge, who knows.

The type of people whose ovaries exploded every time a child simply entered their field of vision. I imagined that if you gathered a few together and surrounded them with children, you could almost hear the faint sound of ovary popcorn in the background.

Like I said, it was not my cup of tea. Or so I thought.

What I've learned (about how au pairs really are)

I have since learned that au pairs are some of the most courageous, gutsiest, badass go-getters I’ve ever met. Exceptions aside, they have, for the most part, left me in awe.

To pack up your life and move to the other side of the world and live with a bunch of strangers? That’s courage. To immerse yourself in a new culture and open your mind to new experiences, to a new way of thinking? That’s bravery. And ultimately, to learn to love other people’s children? That’s awe-inspiring.

After I made the decision to become an au pair, I realised that my previous way of thinking had been totally off. My experience of au pairing and what I had previously thought of au pairing, didn’t add up. Deciding to be an au pair was and still is, one of the best choices I’ve ever made.

So why is au pairing so misunderstood?

But it got me thinking. Why did I used to have those preconceived ideas? Why is au pairing so misunderstood?

When I became an au pair, I realised there were two key factors contributing to the stigma around au pairing.

Firstly, a lot of childcare marketing is, by its nature, rainbow-y and sunshiny-esque.

Secondly - and this one tends to fly under the radar - those who haven’t been exposed to kids often perceive childcare as all rainbows and sunshine.

My own au pair experience (one hell of a ride)

You might be wondering what my au pair experience was like and how I ended up becoming an au pair.

Well, now might be the time for that cup of tea. There’s a bit of a story behind how I came to be an Au Pair and it’s one hell of a ride if you’re up for it.

I can’t cover it all here, but I did write a book about it, I Never Thought I’d be an Au Pair: A Collection of Things I Wish People Had Told Me. You can download the opening chapters here totally free. You’ll also enjoy some more insights from me over the course of the next few weeks here at the AuPairWorld Blog.

And I've got something more for you right now: My first video where I have the chance to introduce myself to you personally and get into the questions of this article in a little more detail.

Why au pairs are misunderstood

Teaming up with AuPairWorld

As the Founder of The Au Pair Movement, I’m excited to let you know we’ve teamed up with AuPairWorld to bring you a 3-part blog and video series (this is blog #1) to help you #keepcalmandaupair.

So, grab some cushions, settle on the couch and put your feet up, story-time is coming up and it’s not going to be what it usually is.

More from Casey:
Blog #2: What to do when things don’t go to plan: My tips and the TRUST method
Blog #3: Au pairing after the crisis: My thoughts on taking the leap 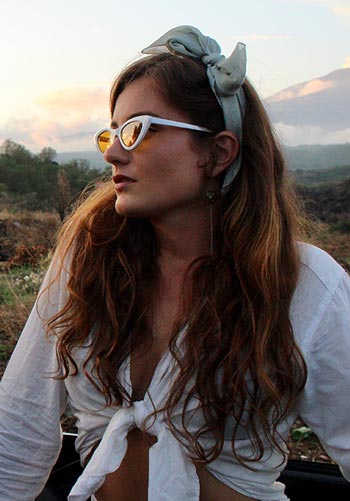 About the author:
Casey Aubin has climbed in the Himalayas, trained in Muay Thai and survived one and a half years as an Au Pair in Italy. Just like you, she never thought she’d do a lot of things and yet here we are. An entrepreneur, founder of The Au Pair Movement and teacher of various things, Casey is currently in Perth, Australia. Her book I Never Thought I’d Be an Au Pair: A Collection of Things I Wish People Had Told Me is available in Kindle format on Amazon.

Want to have your own au pair adventure?

Then register as an au pair at AuPairWorld!